Our middle school camp has been on the edge of my radar for years, but I’ve never gone. And now, as the new middle school youth minister, I’m leading a group there this summer. How did that happen?

Years ago, after cajoling my youngest sibling into going, my mother whispered that he had actually liked it. I kept hearing about some team-building thing involving a group of boys… holding a giant log on their shoulders… and racing through an obstacle course. 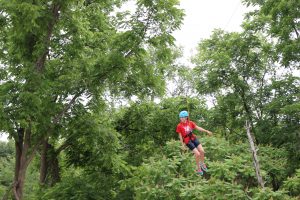 Studying youth ministry in college, I learned that there were growing numbers of quality high school camps (special thanks to Lifeteen), but not much as far as middle school. Ah, middle school. That twilight zone where kids start to think like they’re older, but want to act like they’re younger. They’re grasping at abstract concepts and balancing the persistent need for physical movement. With dramatic variations on this from student to student, so it’s no wonder creating something to fit their needs is hard.

After college I worked at a small parish, and as I was getting to know youth leaders from other churches, I asked for good kids summer activities. The answer was always do Extreme Faith Camp!  …if you can pull it off.

I was surprised to learn that Extreme Faith Camp isn’t an outside organization. It’s Catholic churches DIYing it together, following a pre-set pattern.

About 10 years ago two youth ministers decided to make a Catholic summer camp. It was uniquely made for middle schoolers, which was, sadly, atypical at the time. After planning and pooling funds, they took the plunge, renting out a full campground for a week. It was a success! Slowly, churches kept joining and growing the camp, passing on the blueprint as new times and locations were added.

It turned out their formula was just what the doctor ordered. Kids stayed active all day, completing outdoor challenges, using teamwork, and exploring a new environment, while challenging their minds with bite-size times of meditation, prayer, and scripture reading. The balance got tweaked every year, and the tally grew to 10 camps in MN and surrounding states. There are now centralized leaders, hundreds of kids, and multiple campgrounds being used at the same time. About one new camp is added every year. 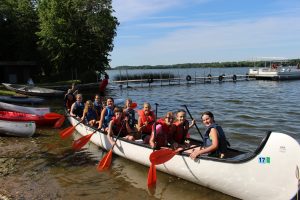 Back then I almost brought a group, but the planning and leading were too much. Despite this, no matter where I went, I just. kept. hearing about it.

I heard that it actually reached middle school boys because everything was so darned hands-on.

I heard that it worked for all different kinds of kids, from phone-centered socialites to hockey fiends.

I heard that kids walked away seriously changed for the better, and that was the norm rather than the exception.

In millennial fashion, I was skeptical. But when I started at St. Pat’s this summer, I heard even more. I learned the details, and my predecessor told me that Extreme Faith Camp was by far the most effective thing we did for our middle schoolers.

You know what? Color me impressed. Even though I haven’t seen it yet, I now know what Extreme Faith Camp is. I’m helping plan EFC for St. Patrick’s and other churches’ youth. We have many months (and fundraisers) yet to go, but I can feel the excitement building.

I’ve heard a lot about you, Extreme Faith Camp. Bring it on.