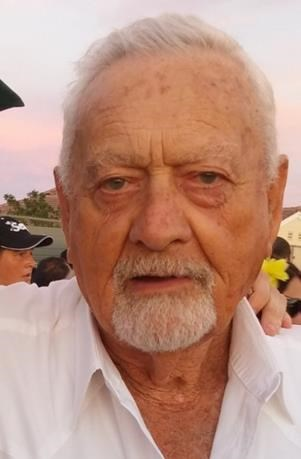 William Michael (Bill) (Mickey) Egan of Oak Grove, known to his friends and family as “Gaga,” passed away peacefully on October 1, 2018, at the age of 87 years.  Born in Minnesota in 1930, Bill served in the Air Force and married Gloria Dawn (Ferguson) Egan, his cherished wife of 65 years.  They had five children, Michael, Patricia, Timothy, Shawn, and Joseph.  Bill and his family moved to California in 1956 and ultimately found his home in Coarsegold, CA, in 1981, where he worked in tractor grading and construction. He fell in love with the area and the people.  It was not long before his charming personality, quick wit and strong character attracted old and new friends alike, creating great friendships and extended family in the community.  Bill Egan was much more than a grader, a husband and father; he was a mentor, a role model and a friend.  He taught each person he met about life in sarcastic truths, which begged to be understood simply, with laughter, and with a unique charm all his own that could draw in anyone who listened.  He lives on through his five children, eleven grandchildren, and six great grandchildren.

Lunch will be served in the Social Hall following the funeral.

Burial at Calvary Cemetery in Anoka at 2:00 p.m.