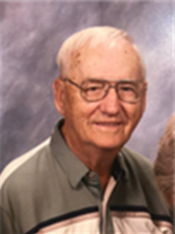 Bob was born to Anton and Katherine (Wald). He grew up on a farm in Hague, ND. Bob’s first language was German and he did not learn English until he went to school but he never lost his strong German accent. He moved to Aberdeen where he met his wife, Theresa (Fischer) and where they raised their two children. Bob worked many years at Dakota Sash and Door and enjoyed ushering at St. Mary’s Church. Bob was always active, social and in the know. He was a lifelong gardener and enjoyed a good garage sale bargain. You often would hear him whistling while biking, driving his scooter around town or taking his heated golf cart to the YMCA for a workout. He was very social and enjoyed cards, bingo, bowling, dancing and a good conversation. He and Theresa wintered in Florida and Arizona for many wonderful years. In later years they moved to Minnesota to be close to their family. Bob was a loving caretaker of his wife and was extremely proud of his grandchildren and great grandchildren.  His love for his family will endure forever.

In lieu of flowers, the family is asking for memorials in Bob’s name to the YMCA of Andover Senior Fund.