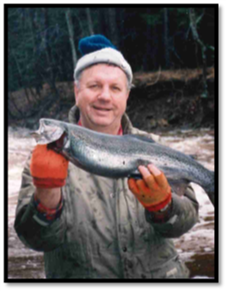 Kevin’s journey started on December 10, 1933, the oldest son to Albert and Mary Jonas. Kevin was born in St. Martin, Minnesota. When Kevin was still little, Albert and Mary moved their small family to St. Cloud, where Kevin would spend his childhood, grow up, make many lifelong friends, and go to school. He was very proud to be a Cathedral Crusader where he graduated High School in 1954.

After graduating High School Kevin joined the Armed Forces where he attained the rank of Corporal and worked supporting the Command and Control Center for his unit in Germany. He was honorably discharged and enrolled in St. John’s University in Collegeville, Minnesota where he graduated with a Bachelor’s Degree in Political Science.

In 1957 Kevin met the love of his life Clara Kuechle of Kimball, Minnesota and they were married two years later in St. Anthony Catholic Church in Watkins, Minnesota on August 1st, 1959. Kevin and Clara had four children and eventually settled in Chaska, Minnesota in 1972. Kevin worked in the nearby town of Waconia, Minnesota as an Insurance Agent and managed the Casualty Insurance Agency for 27 years. He then worked as a Financial Planner for 8 years prior to his retirement.

As a member of the community Kevin served as President of the Waconia Lions Club and was a lifetime member of the Knights of Columbus. He served the church by teaching high school Catechism at Guardian Angels Parish in Chaska and later as a Meals on Wheels volunteer.

He loved to fish, and hunt. He shared in many up-North hunting camp stories with his father, brothers, sons and nephews; however, those stories will forever stay up North, as Kevin would often remind us, “What happens in camp stays in camp”.

When loved ones come and go unexpectedly, we learn that nothing really lasts as long as we hope. Kevin’s journey ended on September 15th, 2019, after a 2 year battle with cancer. He is now with his parents, Mary and Albert, and brother, Earl; however, he lives on in our memories and stories, and in what all of us have become because of him.