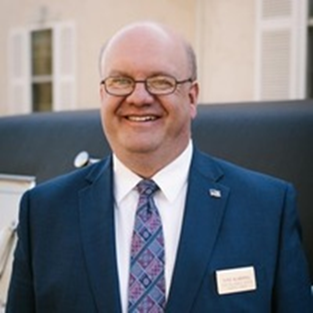 Tony was born on September 12, 1971 in Detroit Lakes, MN to David and Sandra (Johnson) Karsnia. In 1975 they moved to Sauk Centre and returned to Detroit Lakes in 1982. Tony graduated from Detroit Lakes High School in 1989. While in high school, he served as President of the local DECA chapter. He graduated from Detroit Lakes Technical College in 1990 with a certificate in Professional Sales. Desiring to further his education, Tony attended Fergus Falls Community College and Anoka-Ramsey Community College, majoring in Business Administration. He worked for United Coach and Johnson-Williams Funeral Car Service in Minneapolis for several years before becoming the business manager of Spielman Mortuary in St Paul. In 2013, Tony decided to return to college, earning his Bachelor of Science degree with a major in Mortuary Science from the University of Minnesota.  Since then, he has been employed as a licensed mortician with Thurston-Lindberg-DeShaw Funeral Homes of Anoka and Andover.

On June 11, 2005, Tony married the love of his life, Kimberly Kuhlman, in Circle Pines, MN.  Tony and Kim are active members of St. Patrick Catholic Church in Oak Grove, where Tony has served as a lector, usher, chairman of the greeter ministry, chairman of finance for CountryFest, director of the Miscarried Baby service, and member of the cemetery committee. Tony was a Third Degree Member of the Knights of Columbus, Council 9585.

Growing up around small town funeral and ambulance service, Tony developed a special interest in professional cars and a passion for funeral service, at a very young age.  While he took his first death call at the age of four and helped answer the funeral home phones over the years while growing up, he officially began working at the funeral home at age 14. Tony always felt a sense of pride and fulfillment putting on a tie and being there for others in need. He was at his best when doing things for others. He enjoyed helping people in any way he could, and often tried to create situations that made people feel welcome and happy.

Tony joined The Professional Car Society in 1986 at the age of 14. He founded the Northland Chapter while he was a senior in high school and was subsequently involved in the formation of two additional chapters. He was instrumental in hosting three international meets and countless regional meets. Tony served as President of the Society from 2014 to 2020. He was the first President in the Society’s 40 year history to be elected to three consecutive terms.

Tony began collecting cars at age 14 and owned more than 25. He was especially proud to have been personally selected as the third caretaker of the very last Cadillac ambulance built, a 1979 Superior Cadillac, which is a historically significant vehicle that remains in the Karsnia Collection to this day.

In lieu of flowers, memorials preferred.  Please give to Kim or directly to local causes involving homeless teens and suicide prevention.

Private Mass of Christian Burial will be held at St. Patrick Catholic Church in Oak Grove with a private burial to follow.